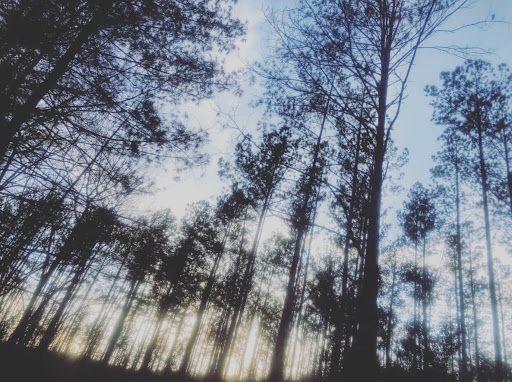 Oak boughs groan high in the canopy above me as a cold and biting wind, the first of the season, tears handfuls of amber leaves from branches and scatters them across the damp forest floor. I watch as gray clouds slowly paint swaths of shadow upon the hills below me. These moments of transition entrance me. No longer summer, not yet fall. Each moment an unfolding event.

David walks over to me and sits down with a thud and exhales. He is communicating to me that he’s not excited about therapy, but here he is. The last few years of his life have been defined by periodic bouts of rage that seem to be coming from nowhere. More than anything, David is angry with his parents for disrupting his life and sending him to wilderness. He is also angry at Blue Ridge as a program, at the staff for holding so many boundaries, at the weather for being so gloomy, at the mosquitoes and sandflies that would make a meal of his exposed skin, at the wilderness for its unpredictability, and at me as his therapist, for not making him feel better.

I sit in silence with David for a few seconds, feeling into what the natural direction of our session together will be. “I’m so sick of the woods. It’s the same thing every day.” I look up at him as he continues, “I mean, I get it. This program has been great and all, but I feel like I’ve learned enough to go home now. These kids are so annoying, and being here is preventing me from working on what really matters: my relationship with my parents. I feel like they’re just going to send me to boarding school, but they can’t see how much work I’ve done.” I sit on the momentary impulse to point out the link between his strained and failing relationships in the group and his alienation at home. After a moment, he laments, “It just feels like no matter what I do, it’s never going to be enough.” Here is an opening.

“I think that’s actually an old feeling, isn’t it?” I have a hunch that this goes back pretty far in his life, at least until second grade, when he was diagnosed with ADHD, and when he started to get kicked out of class several times a week for being disruptive. He looks down, “Yeah, I guess I’ve kind of always felt that way.”

As it is for all of us, David finds a certain comfort in his anger, for it gives him a reason outside of himself to be so miserable and so stuck. This allows him to feel blameless for his misery, and to avoid really looking into the depths of his heart for the painful solution. As he begins to look into his heart with me, he will see deep hurt, bitterness, the belief that there is something nearly hidden in him that is bad, a gnawing feeling that he is just weak. This is called shame.

According to Dr. Lynn Margolies, PhD., “Shame involves an internalized feeling of being exposed and humiliated.” People who experience shame fear that if people really knew them; if others knew their insecurities, thoughts and feelings, their private lives, they would reject them. When we feel unworthy we try to compensate for this feeling by covering up our perceived flaws.

The experience of shame is primarily one of disconnection and isolation; to feel shame is to feel exposed to one’s self and to another in a painfully diminished way. The belief that accompanies this experience is something along the lines of “I am unworthy of being loved.” When one’s underlying belief is that one is simply bad or unworthy of love, there seems to be no way to relieve the matter. Since nothing seems to help, the only choice becomes to numb, fight—anything to avoid to agonizing feelings of shame.

For this reason, the experiencing of shame often remains a hidden driving force behind many of the problematic behaviors that bring our students to wilderness. Here are a few examples of shame avoidance strategies that I often see:

*Strategy to reduce the experience of shame:

*Although it would be convenient if we coped with shame using only one strategy at a time, often it can be hard to delineate between them; say, numbing and attacking one’s self, for example. These categories are meant to help make sense of, and give name to, cyclical and self-destructive patterns that often seem beyond comprehension, not to suggest that they do not blend together most of the time.

The problem with these strategies is that they only offer short term solutions. In the moment, these strategies provide relief to the overwhelmingly painful feelings of shame, while over time these patterns dramatically increase the sense of unworthiness and isolation that triggered shame in the first place. This is called a Shame Cycle.

Many of our students have remained relatively uninterrupted on the Shame Cycle for years. It’s not that the people who loved them did not try to reach them, but that to someone engaged in a shame cycle, being reached, being exposed, is the very thing they are avoiding. They don’t talk about this with anyone. And why would they? Talking about shame is excruciating because of the belief that this pain is ultimately unchangeable, unhealable—rather than merely suffering from an identifiable hurt, someone experiencing shame experiences themselves as fundamentally flawed.

When I sat with David for the first time five weeks ago, he sat cross-legged, leaning forward with tears streaming down his cheeks as I broke a small stick between my fingers. He spoke to me urgently through clenched teeth, saying, “I want to be different. I don’t ever want to be like I was.” It was his first week in the Wilderness—a time of overwhelm and exposure for anyone—and David was feeling raw, hopeful, and devastated, all at the same time. What I noticed more than anything else was his longing to be anyone but himself.

He desperately wanted to purge himself of the troubling and “disgusting” parts of him that kept getting in the way. It was as if he was looking to me as a surgeon who could cut out the tumor that was killing him. He was saying, “get rid of my shame.” The problem with this approach to psychological healing is that it is rooted in self-rejection. The parts of ourselves that we try to cut off and deny do not go away. Instead, they go unconscious and become harder to recognize and understand. But shame thrives here, like mold quietly taking root in a cool, damp space.

“The curious paradox about change is that when I accept myself just as I am, then I change.”-Carl Rogers

Shame creates an internal environment where people believe there is something “wrong” with them. But healing is not like fixing a broken down car at the Mechanic. The balm for shame comes through the process of building trust. My task with these students is not to fix what is “wrong” with them. It is to build trust so that I may come to sit with the parts of them that they think are loathsome. When they take this brave and soulful step of willingly exposing their pain and hurt, it loses its power. Thankfully, like mold, shame cannot thrive when exposed to light and fresh air. In this approach, I am communicating to them that I believe there is actually nothing they need to do to get rid of their shame (get better grades, stop acting defiantly, not be “weak”), but that simply by being with and attending to the wounds that are already there they can, and will, heal.

You do not have to be good.

You do not have to walk on your knees

For a hundred miles through the desert, repenting.

You only have to let the soft animal of your body

love what it loves.

Tell me about your despair, yours, and I will tell you mine.

Meanwhile the world goes on.

Meanwhile the sun and the clear pebbles of the rain

are moving across the landscapes,

over the prairies and the deep trees,

the mountains and the rivers.

Meanwhile the wild geese, high in the clean blue air,

Whoever you are, no matter how lonely,

the world offers itself to your imagination,

calls to you like the wild geese, harsh and exciting —

over and over announcing your place

in the family of things.