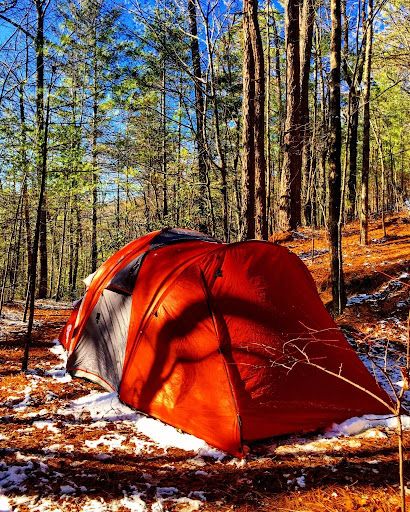 Thriving in Adversity: A Case for Inclement Weather

It was a sunny day, and very cold. A bitter wind whipped across the gap where we were camping, moving in like roaring waves from the next ridge and quickly stripping away any ambient heat from the ﬁre. Despite being early afternoon, it was very cold. Most of the new members of the group were working on personal assignments in the large 10-person tent that protected us from the elements. A few who had been there the longest opted to brave the weather and prepare a hot meal for the group. One girl posted up in the vestibule of the tent, pumping clean water for everyone’s water bottles. One moved quickly, gathering and adding sticks to the raging ﬁre that burned them to coals almost as quickly as she could add them. And one lovingly chopped vegetables for a cheesy veggie pasta dish. All were smiling, and casually discussing their favorite things about the schools they attended. I realized in that moment that despite the adverse conditions, we were not merely surviving, we were thriving.

As a ﬁeld instructor, I have seen four winters in the north Georgia woods, and it is without a doubt my favorite season. Though we don’t get consistently harsh weather like programs out West, we do get weeks of intense cold or snow that come on suddenly and ﬁerce. The group is forced to quickly adapt and come together to create a sense of security and comfort in the new conditions. I’ve seen groups, without the direction of ﬁeld instructor, build shelter, and ﬁre, and make food all while cultivating a powerful sense of community and camaraderie that wasn’t quite as present before. Not only are they showing each other a higher level of care and engaging in healthier relationships in doing this, they are also showing care for themselves. This often challenges the personal narratives of “I’m not good enough,” or “I can’t do anything.” On days and weeks like this, we are expanding our comfort zones and increasing distress tolerance. We don’t have time to sit around and talk about resiliency; we are too busy experiencing it.

I don’t mean to craft the impression that it is all sunshine and rainbows whenever the weather turns bad because often the physical discomfort is exactly what is needed to bring old behavior patterns to the surface. We see big behaviors in bad weather. And, we often witness a powerful building of self-efﬁcacy as they choose to respond to the weather with a sense of empowerment rather than as a victim of circumstance. It is truly incredible to see.

That is why I love the winters. I love how clear and crisp the stars are in the cold night. I love the far-reaching views we can see through the limbs of bare trees. I love the silent mornings of a forest recently blanketed with snow. And I love to witness someone thriving, and celebrating, and living through adversity, sometimes for the ﬁrst time.

The day I described above was just one in a ten-day stretch when the temperatures didn’t exceed freezing. On that day I pointed out to the girls that it was pretty cool how they could still be having such a fun time despite the weather. One of them paused, thought about it, and responded with a smile: “Yeah, that is pretty cool.” She later told me that she wrote in her letter home: “Mom if I can do this, I’m pretty sure I can do anything.”