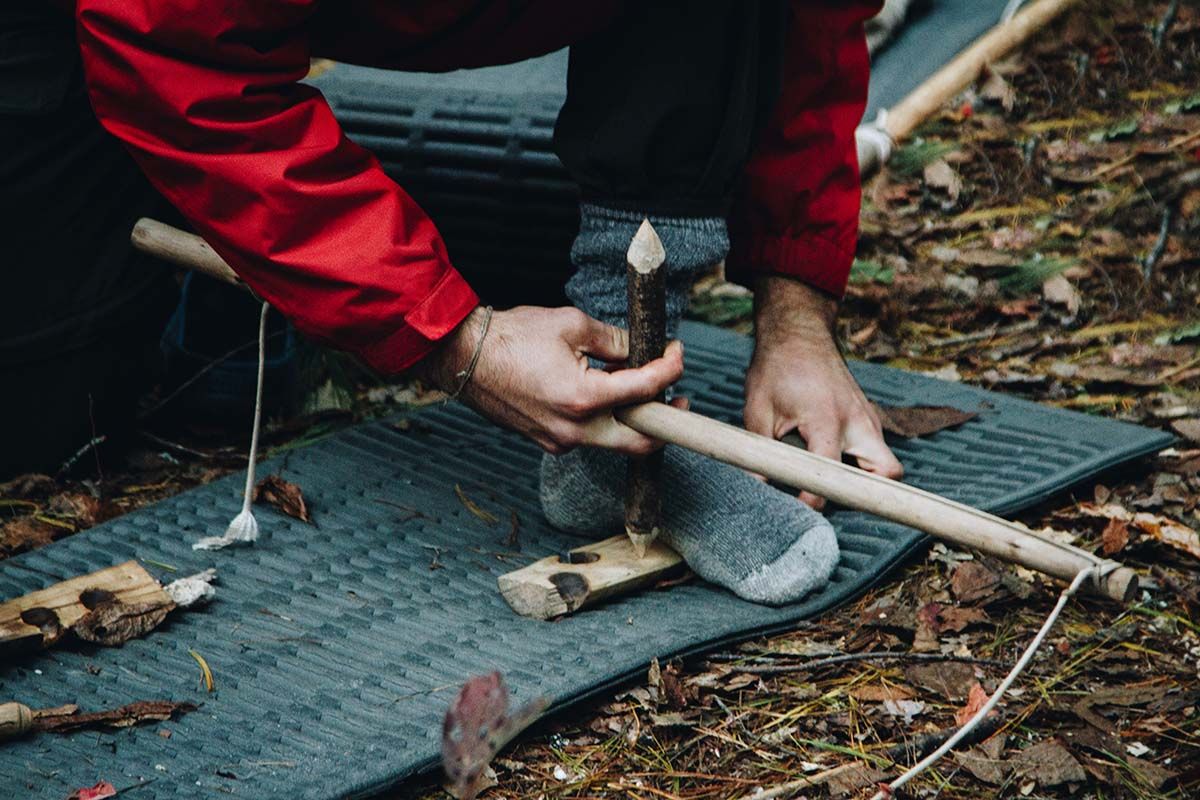 The Question: Why Do We Bowdrill?

I have been thinking about this question for a while. After four years in the field, hundreds of personal embers and who knows how many more witnessed, you would think it would be easy for me to answer that question. I have been a long-term proponent of bow drilling because I have seen it work miracles. I have seen tears of anger, joy, and triumph. I have seen bows broken in rage and then re-crafted with delicate care and love. Of all of the things we do out there in the woods, nothing can elicit the full range of emotions quite like bow drilling.

But that is not why we do it. Not entirely.

The first ember I ever busted was achieved because I let go of fear. For me, I saw bow drilling as a metaphor for my success as a field instructor. I didn’t realize it at the time, but I was hinging my self-worth on whether or not I was able to achieve an ember. And I was failing. Over and over and over again, I tried and failed. I felt angry. I felt powerless. I felt hopeless. I felt like a bad staff. It was was cognitive distortion, though I didn’t know that at the time. Fortunately, I had supportive team members around me, coaching me in form and technique. And trusting, so absolutely, that one day I would bust. It would happen. I was the only one who didn’t believe that. And I was the one attaching my own worth to something outside of me. I stopped letting the ember drive me. I focused on the process. I breathed. And I busted an ember.

This is similar to what most of our student’s experience. Some staff would say that the reason we bow drill is to teach how to be comfortable with failure. And I agree with that. A huge part of bow drilling is being unsuccessful. It can be hard, and discouraging and in those moments it can tap into our own perceptions of self that we have been hiding and bring them to the light. Those are the moments that teach us to be okay with ourselves even in the face of failure.

Others would say that the reason we bow drill is to teach success. For the kids who have never believed in themselves, who never thought they could achieve anything, to be successful at bow drilling re-writes a lifelong personal narrative of weakness and builds a sense of self-efficacy. Because finally, here, directly in front of them for all the world to see, is a symbol of their success.

It could be argued that we bow drill to build distress tolerance and resiliency. It is undeniably hard. Imagine a moment when sweat is pouring down your face, you’re breathing heavy, your arm feels like spaghetti, you hit the point where you just can’t go any further…but you do, because it’s only 30 more seconds until that ember and your group needs a fire a tonight. That moment mimics acute stressors in life. When you have to tell yourself “I can do this, I know I can,” if you want to achieve your goal.

Bow drilling is empowering. It has the power to break us down and build us up. It brings our demons and distortions out of hiding. To bow drill is to provide, to create, to connect. The reason we bow drill isn’t to achieve an ember, or not achieve an ember. It isn’t to develop strength. It isn’t to reveal destructive coping patterns. It isn’t any one of those things, because it is all of them, and more.

We use metaphor a lot in the wilderness. This is a common question we may ask a student: “How is this a metaphor for your life?” Some students seek every opportunity available to find quality pieces of wood for their set. They keep these pieces sealed, protected and dry at all times in order to set themselves up for success when it is time to bow drill. But many, particularly in the beginning of their stay, avoid bow drilling altogether. It is not uncommon to see someone, in the beginning, spend every session working on their hole in their top rock rather than practicing bow drilling. Or saying that they can’t do it because they don’t have a good spindle or fireboard. This could be a rich opportunity to look at ways avoidance shows up in their life at home and ask, how can we break that pattern, and do something different this time?

We also use metaphor in understanding the individual pieces of the set. As each student enters Fire Phase, they receive a completed bow drill set prepared by the group. Each group member explains the metaphor for the pieces during the Fire Phase ceremony, and asks the new member to share about it. It often looks like this:

Bow drilling taps into a deep well of possibility with every student that engages with it. It can be infinitely more powerful than simply rubbing two sticks together. We bow drill because the way we approach bow drilling is the way we approach life. I couldn’t possibly predict, in a singular answer, how any one person would be affected by it. Which is why the lessons of bow drilling are so authentically powerful, and often miraculous.