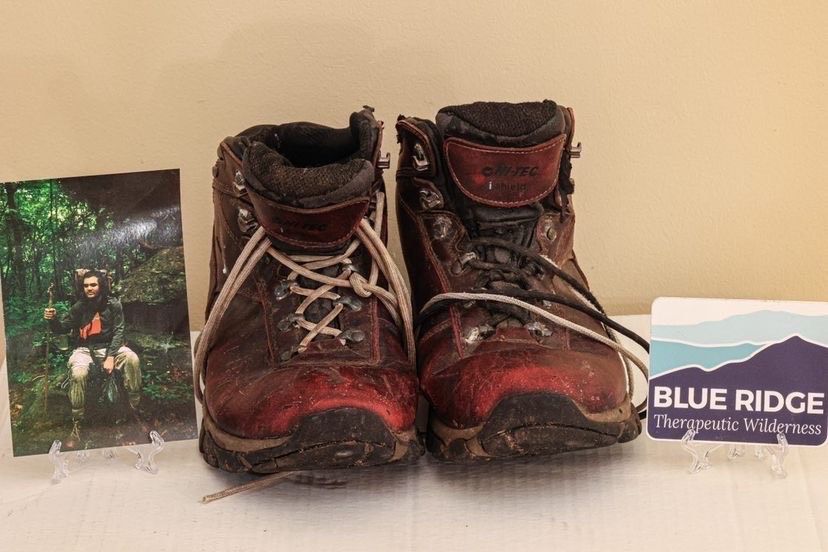 February 14, 2022 Ben attended Blue Ridge in the spring of 2020. His father had recently passed, and there was tension in his family relationships. After attending the program, Ben and his family grew closer. He was accepted to each of the 13 colleges he applied to. Read his college essay below.

Maybe not all punctuation, but the semicolon for sure. As a person with ADHD and other learning challenges, I never totally understood when to use the semicolon. It is not an end; it is sort of a pause. Did I get that right? My closest experience with the semicolon came when my father got one.

My Dad had part of his colon removed after his diagnosis with stage 4 colon cancer. Having an inappropriate, but effective coping strategy of turning anything into a joke, he began to use the semicolon as his symbol. Get it? He only had part, or a semi, colon after his first surgery. I sold t-shirts with semicolons on them to raise money for colon cancer research in my father’s honor, and in hope of saving his life.

At first the semicolon seemed like it might become my friend. My father did really well. The treatments started to shrink his cancer. He continued to work. He did a world championship triathlon. He biked, ran, swam and smiled. I began to think that maybe the semicolon would be a pause in our lives, and not the end of his.

Eventually, the cancer grew throughout his body. He traded his time on a bicycle for a motorcycle with a sidecar and we had many adventures in that. My father may have eventually lost his life, but he never gave up on life itself.

When he died, I felt lost. My father, an inspiration to everyone, including me, never understood my learning—how one day I seemed to get everything right, and on others, it felt I had never been to school at all. I clearly remember asking my parents when I was in kindergarten why I was not learning like the other children. I told them that I would not look stupid. Feeling lost, I acted out, doing silly things, getting into trouble and simply giving up. All of these actions made it look like I didn’t care (instead of I wasn’t trying).

Fatherless at age 17 and lost again, I regressed to these behaviors. My mother, worried about my future, sent me to a wilderness program in a rainforest. There I was, sleeping on the ground with a tarp covering me, eating food prepared in a fire I had created without matches, forced to take my own pause.

One day, we were hiking up a steep incline coming out of the Georgian wilderness. As we got higher, I was tired and out of shape. I wanted to quit. Badly. But upwards I went. At the top I was breathless. I felt tears on my face. I had not thought that I could do it, but I had. I thought to myself, “How many other times in my life have I not believed in myself? That I had given up without trying? What if I had just stuck it out?" At that moment, I felt my father’s presence and pride in me. Although we might have fought about my learning, I know he never doubted my intelligence, my humor, and my other strengths. This was my semicolon moment.

Life is a process with times of pause, when we stop to think about where we are, where we want to go and how we will get there. These pauses can be hard, and although I still struggle with punctuation and get lost sometimes, I have learned to communicate, often with humor, and that I have the strength to persevere. Now, when I look ahead, I see myself climbing upwards, step-by step. There may be some pauses, but I know that I can do it.